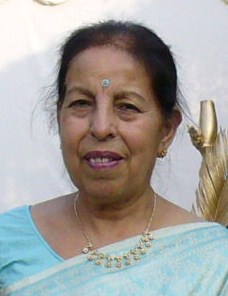 On Aug 12th (2011), my Mom, passed away after an 18 month struggle with cancer. She was a remarkable lady. Her Chautha (memorial service) was held on Aug 15th, and I spoke about her. Thankfully she held on until I arrived at her bedside on 11th night. However I am not sure if she knew I was even there. My sister had been with her for the last several weeks.
We all have our favorite memories of her. She is survived by her husband, of over 50 years, Mr. Prem Kumar Khuller, daughter Alpana, son Samir, son-in-law Sanjeev, and daughter-in-law Kalyani, and three doting grandchildren -- Tanvi, Tulika and Aamir.

There is so much to say, and one has to speak for a short while about her and I chose some memories, the ones that were particularly strong, mostly based on my recollection of her when I was a kid.

I prepared a few remarks for today.
Since the Panditjee mentioned that both my parents have the same name – my sister just reminded me that  in fact my Mom was called Sneh Lata as a child, and my Dad was called Arjun Dev. It was several years before they got married that somehow both converged to the same name --  Prem.
Words cannot express how we feel today. Sometimes we fail to express ourselves to our loved ones, and Mom I want to tell you something I have wanted to say for a while – Mom, I love you. Even though I never said it to you, I know that you always knew that was true.
In any case, I wanted to share some personal stories which you may or may not have heard before.
My Mom was a very keen badminton player, who played competitively after she got married to my Dad since the Railway clubs always had facilities for sports. I must remind you that she got her start playing badminton with a rolled up paper ball and her slate, with her younger brother Shashi.  The slate was actually purchased by her father who hoped that she would use it for Mathematics, but my Mom preferred to do the math in her head and thought it was better used as a badminton racket, and ofcourse you could keep track of the score  on it as well. I am surprised that it was not patented as an invention.  In 1972 she entered into the railways badminton tournament which I used to go to regularly to watch her play every afternoon after school. While she did extremely well in mixed doubles, she lost 11-4, 11-5 in her singles match against an unknown 16 year old.  I was very very upset. It took me a long time to recover from that loss (probably the only time I saw my Mom lose a match). I only fully recovered my dignity when a couple of years later I saw Ami Ghia’s name in the newspaper as the National Badminton Champion. That was the girl who beat my Mom! Ami Ghia then went on to win seven badminton national titles. Somehow that took the sting out of the loss which I had taken to rather personally.
In many ways the influence  Mom had  on our lives was major – as I grew older, we traded recipes, I always enjoyed learning new dishes from her and I knew that I had to make a recipe quickly after I asked for it, otherwise she would get upset that I made her tell me the recipe and then never made it. So I tried to make all the dishes that she told me about. I still have the handwritten recipes she gave me before I left to go to the US for my Ph.D, exactly 25 years back, almost to the day.
My Mom knew how much I hated shopping and it was with some dread that she usually sent me her shopping lists before my annual trip to Delhi. I would complain, and still buy everything on her list and tell her, Mom its my dream to come to visit you with just a backpack.  She said “yeh, kaisa dream hai!”. Finally when I came to visit her this week it was with a backpack, but Mom you were right, it was not a dream, but a nightmare.
I saw one of the players gobbling some tablets and on the quick glance it looked to me that he was eating something called “Angry tablets”. So I told my Mom that she should also eat Angry tablets. It turned out that they were something called “energy tablets”. I think it must have been these angry tablets  in 1972, that gave her the strength to fight her cancer. She was a fighter. She fought the good fight for 18 long months with the support of all of us, but in the end she lost the fight. Unfortunately she was all alone in the ring at that time. We all have to play the game of life with the cards that are dealt to us, not the cards we would like to have. Mom, I will think of you every time I leave a room and turn the lights off.  Dont worry, you trained us well.
Mom – we will all miss you very much. With love from all of us.
As my Nana would have said “Ab to jathe hain mehkde se mir, fir milenge agar khuda laya”.
The comment in italics, is something I wanted to say, but forgot to say it since it was not in my notes.
Posted by samir at 00:47